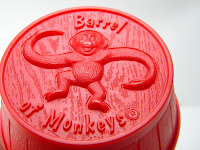 Ok, so I don’t really remember having and playing with the “Monkeys” when I was a kid. I am sure at one point or another: I had a set. I am sure I never knew there was a game you played with them and I am equally sure that there is just something fun about  the very sight of these little plastic hook armed chimps!

For whatever reason, the other day I was thinking about leadership and these monkeys, linked together by the arms, came to mind. I think they say a lot about leadership and couldn’t get the thought out of my mind. So I trekked across town and into the toy store, I had to have a barrel of monkeys! Low and behold there they hung-right on the end of the isle front and center as if calling my name. Now I had to choose a color. Ok course I walked out with a red set and the receipt. Now as an owner of a brand new set of monkeys, I saw on the label “Instructions on bottom of barrel”. Was I the only one that didn’t know this was a game and not just a goofy toy?
Well I just had to play it. My opponent would be Sheila (who I am sure owned monkeys as a kid). I thought I would be cleaver and let her go first so I could watch her monkey hooking technique….I was wrong! She hooked all 15 in a long chain of monkeys without dropping one! So now it’s my turn to be the hook master! I choose my lead monkey carefully-picking one that would be hard to hook with another. Now for my very first (possibly ever!) hook! And I dropped it! I couldn’t hook the very first one! Sheila beat me fair and square! Sheila is the monkey master and I am the 46 year old fool who just bought a barrel of monkeys only to be beat by my wife!

So Just what do these monkeys have to do with leadership? Well the top monkey is the boss or the leader and the rest are the team being lead. There is work to do: get more monkeys on board without dropping them! A successful leader team is one where all of them are strung together and hanging safely by the leader. Here are some observations I saw: 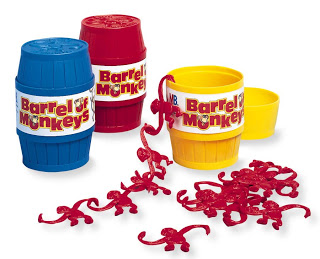 The leader carries more weight than the rest. The burden is on that top monkey! Try to sympathize with them and their weight.

All of the monkeys have a smile on their face. At the end of the day, is your team happy? Even in adversary or differences, a good leader, who responds well, will have a happy team of monkeys!

The team is able to handle the weight on each of them. While the leader does hold all of the weight, each team member has a job to do and a weight to hold. If you cannot handle the weight, move to the bottom of the monkey chain and work your way back up!

The Leader/team is boring and no fun as long as it is in the barrel. Get out of the barrel and do what you were made to do! 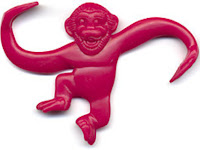 A good leader uses his entire team and understand each of their positions. Sheila got the feel of how the monkeys responded to her movement and the role that each of the played. She used this to her advantage and won!

All it takes is one not doing its job for the rest to suffer. One monkey not hooked right or hooking right will cost the whole team. Are you doing your job? Is your team working with their strengths?

All in all, we are all just a bunch of monkeys trying to hold on and hang on!

Disclaimer: This isn't leadership in it's entirety, just one aspect of it.

Very good analogy! I love how you can take simple things like toys and find an aspect like leadership in it!